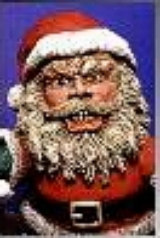 THE URBAN RENDITION OF

"TWAS THE NIGHT BEFORE CHRISTMASS"

By Mike Ramey-- Used by permission

Mike is a writer for a number of newspapers, and he is KJV only Bible believer-- in Indianapolis.
See his Web site at:
http://mypages.netopia.com/manhoodline

Someone will mock at Mike and assume he does not know what he is talking about. Mike is a Black American, and the inner city is his turf. He has been a journalist for several Indianapolis radio stations and newspapers.

'TWAS THE NIGHT BEFORE CHRISTMAS

Twas the night before Christmas,
and all through the city,
while there was record snowfall,
the cops were still busy.

While the Dope Dealers were in the lockup,
dressed in orange so bright,
the local narcs were on the move,
to bust a meth lab by moonlight.

When out on the lawn,
arose such a clatter,
I pulled the slide on my '9
to see what was the matter.

Twas the Swat team in their van,
they rolled out in the snow,
Santa was quickly cornered,
he had no where to go.

But what before my wandering ears did appear,
a cop said with a shout;
"The fat guy gave us the slip,
but we got his reindeer!"

"Move On!" The cops yelled,
at some guys gathering on the corner,
"Or, we'll bust some heads;
you'll soon need a Coroner!"

But, somehow,
Santa slipped down my chimney,
all agile and quick,
I caught him with my laser-dot sight,
and he froze real quick!

"Now Christian, dear Christian,"
he screamed out in glee,
"I am the spirit of Christmas--
don't be messin' with me.

"Up against the wall, you demon" I said
with my word aimed at his neck,
"Jesus wasn't born on this day,
so his birthday you could wreck!"

I slapped on the cuffs,
and opened his bag to see;
I found a whole lot of my stuff from my house;
the fat dude was robbing me!

Santa wanted to get rowdy,
and call his attorney for a deal;
I pumped a round into his leg,
and you should have heard him squeal!

The paddy wagon arrived,
and Santa wanted to get cute;
"Who are you kidding, fat man" I told him;
"You'd better put on this orange suit!"

Sure, it was Christmas morn,
but take a tip from me;
Don't let Santa break into a Christian's house,
at least not while the Christian is armed--
tee hee!"

And as the paddy wagon drove off;
I heard Santa exclaim in the night;
"I'd never thought I'd find a Christian,
who was willing to put up such a fight!"

RETURN TO ENTRY PAGE OF THE JOURNAL