Psalm 73:18 Surely thou didst set them in slippery places: thou castedst them down into destruction. 19 How are they brought into desolation, as in a moment! they are utterly consumed with terrors. 20 As a dream when one awaketh; so, O Lord, when thou awakest, thou shalt despise their image.

Ludwig von Beethoven was born in Bonn, Germany on December 17, 1770 into an unhappy home. His childhood 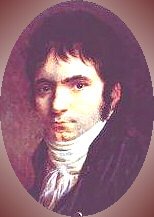 surroundings inspired him to musical heights in spite of brutality. "His early signs of musical talent were subjected to the capricious discipline of his father, a singer in the court chapel." 1 He was forced to start supporting his family as a court musiblipn himself in 1789 due to his father's drunkenness. His father is said to have been in the habit of returning home late at night, drunk. He would rouse young Beethoven from his bed and beat music lessons into him. Proverbs 12:10 A righteous man regardeth the life of his beast: but the tender mercies of the wicked are cruel.

Beethoven's early compositions were under the tutelage of Christian Gottlob Neefe. His funeral cantata composed in honor of the death of Holy Roman Emperor Joseph II revealed his musical ability. Sadly, the cantata was also indicative of the dead life that Beethoven chose to live.

His genuine talent brought about plans to send him to study in Vienna, Austria under Wolfgang Amadeus Mozart. Mozart's death in 1791 prevented this from happening. However, Beethoven went to Vienna in 1792 to study under Franz Joseph Haydn.

With little gratitude to his teachers and still less humility Beethoven is quoted as saying, "What I am, I am through myself." 2Timothy 3:2 For men shall be lovers of their own selves, covetous, boasters, proud, blasphemers, disobedient to parents, unthankful, unholy, Such a man was he!

Beethoven's message to man through his music is said by critic Paul Bekker to be "freedom - artistic freedom, political freedom, personal freedom of will, of art, of faith, freedom of the individual in all aspects of life." 2 His desire for freedom in all areas of life led him into gross sin and excesses. Proverbs 14:12 There is a way which seemeth right unto a man, but the end thereof are the ways of death.

Beethoven was constantly reported to be "in love" but his choices tended topiano coversd the wrong women. They were either aristocrats, married or both! One letter titled 'Immortal Beloved' (now dated 1812 and presumed unsent) was to the only woman that is thought to have loved him in return. "The long-debated riddle of her identity was solved beyond reasonable doubt in 1977 by the American musicologist Maynard Solomon. She was Antonie Brentano (1780-1869), the wife of a Frankfurt merchant and a mother of four." 1

What folly! What wickedness! To pursue and court other men's wives is blatant adultery.  Matthew 5:28 But I say unto you, That whosoever looketh on a woman to lust after her hath committed adultery with her already in his heart.

He was also a slob in his personal habits. "...his personal life was a mess.  He neglected his appearance so badly that he was once mistaken as a tramp and arrested. His apartments - he moved dozens of time - were strewn with old food and dirty clothing. His handwriting was virtually illegible. He couldn't keep track of money." 2   Proverbs 24:30 I went by the field of the slothful, and by the vineyard of the man void of understanding; 31 And, lo, it was all grown over with thorns, and nettles had covered the face thereof, and the stone wall thereof was broken down. 32 Then I saw, and considered it well: I looked upon it, and received instruction. 33 Yet a little sleep, a little slumber, a little folding of the hands to sleep: 34 So shall thy poverty come as one that travelleth; and thy want as an armed man.

Beethoven's brother died in 1815 leaving his son, Karl, in joint-custody to Beethoven and his own wife, the boy's mother. Not being content to help in raising the boy Beethoven instigated a long and painful law suit to take the boy from his mother's care. He finally won custody of Karl through the intervention of the Archduke Rudolph. The mother was broken-hearted and grieved that a "madman, bachelor" would be declared her son's sole guardian.  3 Exodus 20:15 Thou shalt not steal. Such bold cruelty and injustice is evidence that the man was sick in the head. Exodus 22:22 Ye shall not afflict any widow, or fatherless child. Not surprisingly, his relationship with his nephew was stormy. The mother had good cause for her sorrow. Beethoven was such a rotten "parent" to the boy that Karl eventually attempted suicide in 1826. 4

Beethoven began to go deaf at an early age, as is commonly known. His musical ability was amazing in that he was able to compose complicated music in his deafness. However, it is tragic that he did not seek the Lord in this trouble, but rather went on in his own strength to the damnation of his soul. He was also a Roman Catholic, but there is no spiritual help in that whore church for the soul of man. Psalm 62:9 Surely men of low degree are vanity, and men of high degree are a lie: to be laid in the balance, they are altogether lighter than vanity. Psalm 60:11 Give us help from trouble: for vain is the help of man.

The devil has always had his musiblipns because he knows the power of music so well, having been created as a musical creature. Beethoven was one of his, not God's. He composed for the Roman Catholic Church as well as for his perverted Masonic ideals and his own ego. His music has power, but is still ungodly.

Beethoven's god was music. He said "Music is a higher revelation than all wisdom or philosophy." This elevates his "art" above the wisdom of God! What boldness against the Lord! What a blasphemer! God's wisdom says in Proverbs 8:35 For whoso findeth me findeth life, and shall obtain favour of the LORD. 36 But he that sinneth against me wrongeth his own soul: all they that hate me love death.

He was a Freemason and entertained mystical thinking. "His thoughts are often deeply tinged with mysticism, sometimes also with a strange wildness, and their vast range sometimes tends to overwhelm the medium of their expression." 5 This, with his rebellion against God, is evident in the 9th symphony.

The famous (or infamous) "Ode to Joy" makes its' devilish appearance in Beethoven's 9th symphony, completed in 1824. Friedrich von Schiller's poem "Ode to Joy," written in 1785, was the basis for this symphony. The poem was nothing less than goddess worship! (Appropriately, the European Economic Community has chosen "Ode to Joy" as the national anthem for the United States of Europe.)

For whatever reason, the weak minded "Christian," Rev. Henry van Dyke, wrote new words for "Ode to Joy" and titled it "Joyful, Joyful We Adore Thee." His supposedly "Christian" words bear a noticeable resemblance to Schiller's poem glorifying the goddess "Joy." Through this nasty trick the devil has deceived many Christians. Van Dyke's hymn has been paraded and printed as a good, old hymn; when in fact it is a most disgusting mixture of pretended Christianity and goddess worship! He has made mockery of Christians and blasphemed God! To add insult to injury he used the very music of Beethoven which was inspired by and composed for the original idolatrous poem by Schiller!  2Corinthians 6:15 And what concord hath Christ with Belial? or what part hath he that believeth with an infidel? [Read the words of Schiller's "Ode to Joy" and compare with van Dyke's "Joyful, Joyful We Adore Thee"]

Beethoven hated God's wisdom. He hated God's law. He hated the truth and he loved and believed a lie. He had pleasure in unrighteousness. 2Thessalonians 2:10 And with all deceivableness of unrighteousness in them that perish; because they received not the love of the truth, that they might be saved. 11 And for this cause God shall send them strong delusion, that they should believe a lie: 12 That they all might be damned who believed not the truth, but had pleasure in unrighteousness. This is prophetic and yet we can see it in the lives of individuals around us and in history. Such was Ludwig von Beethoven. He died literally shaking his fist at the heavens.

"In December 1826, Beethoven began suffering from a sever cough. Soon pains shot out from his liver and intestines. His feet became tremendously swollen. On March 26, 1827, he went into a coma. There was a violent thunderstorm, and for a moment, Beethoven opened his eyes, raised his right hand and clenched his fist defiantly topiano coversd the heavens, then collapsed forever." 2 It is also said that a wrathful expression passed over his face at this time. This is hardly the death scene of a Christian!

His autopsy was recorded. The pain in his liver was due to cirrhosis following viral hepatitis and chronic alcohol consumption. He also suffered from renal papillary necrosis which was most probably caused by his uncontrolled manner of taking the analgesic Salicin (commonly used at that time and made from powdered willow bark) for his aches and pains. 6 So, we see at the last that he was also a drunkard, like his father before him, and used drugs carelessly to the destruction of his body. Proverbs 20:1 Wine is a mocker, strong

drink is raging: and whosoever is deceived thereby is not wise.   Proverbs 23:32 At the last it biteth like a serpent, and stingeth like an adder.

Beethoven's grave stone was a suitable monument to his Freemasonry. It is an obilisik adorned with the symbol of the bee. (Also see, The Lost Tribe of Dan.)

His last words are said to have been "The comedy is ended." What a dreadful commentary on his own life. It certainly was not a comedy, but rather a chronicle of rebellion against the holiness of God Almighty; the story of a man who chose the pleasures of sin and treasures of Egypt only to find them empty and broken vessels.

Proverbs 1:25 But ye have set at nought all my counsel, and would none of my reproof: 26 I also will laugh at your calamity; I will mock when your fear cometh; 27 When your fear cometh as desolation, and your destruction cometh as a whirlwind; when distress and anguish cometh upon you. 28 Then shall they call upon me, but I will not answer; they shall seek me early, but they shall not find me: 29 For that they hated knowledge, and did not choose the fear of the LORD: 30 They would none of my counsel: they despised all my reproof. 31 Therefore shall they eat of the fruit of their own way, and be filled with their own devices. 32 For the turning away of the simple shall slay them, and the prosperity of fools shall destroy them.

The blip Connection--  Link to article on our site