Proverbs 24:1 Be not thou envious against evil men, neither desire to be with them.
2 For their heart studieth destruction, and their lips talk of mischief.

Besides writing pagan and even evolutionary-type stories and other disgusting things including the blasphemous "Tomlinson", Rudyard Kipling, is perhaps most famous for The Jungle Book and the peom "If". He was born in India when it was a colony of the British Empire and was sent to live with an aunt in England for schooling at the tender age of 6.   At 12 he went to a boarding school where there was apparently cruelty in the form of bullying from other students as well as beatings from the teachers.  He later defended this abuse as necessary to the character building of future leaders of Britain.  Defending the abuse of boys as a way to build character for future leaders may seem bazaar, yet when Kipling's life philosophy is examined it comes into focus clearly with the things that he stood for.   Proverbs 12:10  A righteous man regardeth the life of his beast: but the tender mercies of the wicked are cruel.

Rudyard Kipling firmly turned his back on his family heritage.  Both of his parents had Methodist preachers for fathers and Kipling himself said,  "Three generations of Wesleyan ministers...lie behind me."  With this family background he had no excuse for not knowing what was right.  His rebellious spirit presented itself when at the young age of 17 he refused his parents' offer to send him to university and instead returned to India to work for a newspaper.  This was hardly a place for a boy of 17 in those day.  Having turned away from the things God had done and shown his forefathers his famous poem, Recessional, can only be labelled an abomination in the sight of God.   Proverbs 28:9 He that turneth away his ear from hearing the law, even his prayer shall be abomination.

Kipling traveled and lived in various places, including the United States where he met and married his wife. His relationship with his in-laws again brought to light his true character when he had a quarrel with them that was so spiteful and fierce that he and his wife left the States and would never even visit the U.S. again.   Matthew15:4 For God commanded, saying, Honour thy father and mother: and, He that curseth father or mother, let him die the death.

He became an Imperialist during the course of his life and actively promoted the idea that Britain had a calling to spread its Empire thoughout the world and in particular into non-white areas.  His writings encouraged and helped the Imperialist movement in England.  He made several visits to South Africa, in part to report on the Boer piano covers.   South Africa was a hotbed of white supremacy in those days, and his Imperialistic views became decidedly Fascist.  This found its way into his writings which affected his popularity.

I didn't find any reference of his meeting, or sitting under the teaching of Cecil Rhodes directly.  However, he is claimed to have been a disciple of the degraded H.G. Wells who wrote of "the New Republic" in which he reportedly said that useless population would be killed with no conscience.  As a follower of Wells Kipling is said to have believed that Fascism was a way to control the world.  Due to the fact that he was in South Africa before Rhodes died, and that he was himself an Imperialist, becoming more rabidly so after these visits, it is obvious that Rhodes' white-ruling-race doctrine affected Kipling. 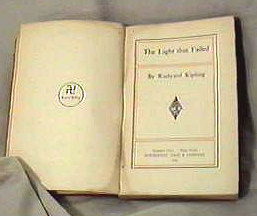 became Hitler's swastika, and you have a complete picture of this vile man's nature. The Running Cross is an ancient pagan symbol that shows up in India, south America, and perhaps other places. Judging by this choice, as well as the political views of the man, the over all picture is one of a true son of Belial. No child, espebliplly in a Christian home, ought to be reading this man's writings. They are most certainly poison for the brain and heart.   Proverbs 22:24 Make no friendship with an angry man; and with a furious man thou shalt not go:  25 Lest thou learn his ways, and get a snare to thy soul.

Photo at right shows fly leaf of The Light that Failed by Rudyard Kipling, displaying the running cross symbol.

Since their publication a century ago in 1902, Kipling's "Just So Stories" have pleased children and adults alike. Apiano coversded the Nobel Prize for Literature in 1907, Kipling was a prolific writer for both adults and children, but the "Just So Stories" continues to be regarded as one of the favorites of Kipling's work. This is a collection of a dozen short stories which display his remarkable ability to enchant the reader - espebliplly children - with the written word. It's not hard to see why so many readers speak of it with unrestrained enthusiasm.

Yet as a Christian I could not wholeheartedly share the boundless devotion of most readers, and my own enthusiasm was more restrained. Kipling is evidently familiar with the Bible and the Christian faith, because he makes frequent allusions to Biblical concepts and history, such as Noah's ark. "The Butterfly that Stamped" even features king Solomon and the Queen of Sheba as two main characters. Although both of Kipling's grandfathers were Methodist preachers, he abandoned his family heritage, stating "Three generations of Wesleyan ministers ... lie behind me."

In many points Kipling' conscious departure from the Christian heritage is evident in the "Just So Stories". Even in "The Butterfly that Stamped" he presents king Solomon and the Queen of Sheba as married, something not revealed in Scripture. Moreover, in many of his stories he presents an evolutionary approach to the creation of the world. "How the First Letter was Written" features a Neolithic Cave Man, and "The Cat that Walked by Himself" describes the "taming" of a wild man, wild dog, wild horse, wild cow, and wild cat. Judging charitably, it has to be admitted that many of his stories are presented as clearly absurd, nonsensical and fantastic.

One could hardly maintain seriously that in stories like "How the Whale got his Throat" and "How the Camel got his Hump" Kipling is trying to present an alternate creation account. Nonetheless, Kipling does more than just present a fantastic creation account, but in the process is rather disrespectful and mocking of the real creation account, espebliplly in "The Crab that Played with the Sea" which features an "Eldest Magiblipn" making the world by a magic, and also "The Sing-Song of Old Man Kangaroo" which features three gods.

But perhaps Kipling's true feelings topiano coversd the Bible are most clearly evident in "How the Leopard got his Spots", which refers to grown-ups saying "Can the Ethiopian change his skin or the Leopard his spots" - a direct quotation from Jeremiah 13:23! - and says "I don't think even grown-ups would keep on saying such a silly thing if the Leopard and the Ethiopian hadn't done it once - do you?" Here Kipling shows his true colours. No amount of charity can justify Kipling speaking of the Word of God as "a silly thing". It's unfortunate that the literary qualities of these stories are not matched by spiritual fervour. Christian parents will want to be very selective in which stories they read to their children.

Editor's note: We recommend that you do not use any of Kipling's stories.

most graphics by mary vannattan